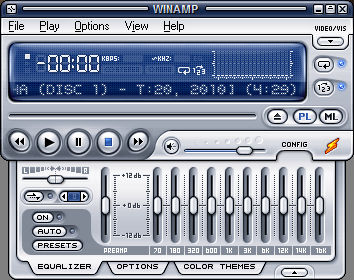 Well, after testing DrO’s beta Winamp Community Update Pack (WACUP) for awhile, I decided to make a separate WACUP Information page. Also, back in November 2016, I started adding my song history to a MySQL database and generating my song history from that. Now, I’ve decided it would be a good idea to separate my Winamp History from my Entertainment page.

Previously, I was generating all of the data only when a song was played or stopped. Winamp would call my custom PHP script using either Brandon Fuller’s Now Playing: A Winamp Plugin v3.9.4.0 in the standard Winamp or the built-in Play Tracker POST option of WACUP. It would save the information to a static text file which my Entertainment page would include. Now, only the currently playing song is saved to a text file when a song is played or stopped. The rest of the history is generated as the page is viewed from the MySQL data. This will allow me to change the presentation of the data without the need to play a new song to update the static text file.

Anyway, I’d like to thank DrO for all of his hard work on WACUP with Radionomy basically dropping the ball on Winamp. 🙂