I added links to the 2016 NASCAR Sprint Cup Schedule and Chase Formats for each series to my NASCAR page.

Updated my blog to WordPress 4.4.2. It was mainly a bug fix from the looks of it. As usual I performed backups of my file structure and database before applying the update. This is also a test post to make it all still works fine. 🙂

All I have for now. If I make any other changes worth noting, I’ll update this post. 🙂

I updated my NASCAR page to get its news feed from Yahoo instead of ESPN after it started to bug out. I also added a new speed test to my Latest Speed Test Results page. It’s DSLReports‘ new Speed Test which is still a work in progress.

Finally, I’ve started to test out using HTML5 with Flash fallback video players on my site. I am using my Inception Blu-ray page for these tests. Currently I am testing out Mediaelement.js player. I have also tried out the JW Player and Video JS players. I suppose I should make one test page for each player to see which works best.  I’d use the JWPlayer if it didn’t have the logo always on the player (the free one anyway). I’m still playing with them to see which I like better.

The main thing with my blog is that I have disabled the Really Simple Share plugin because of what they’ve started doing with it and am now using the Jetpack Sharedaddy module to place Twitter, Facebook, and Google+ buttons on my posts. Using it for now anyway.

That’s all for now. If I think of anything else I’ll update this post. 🙂 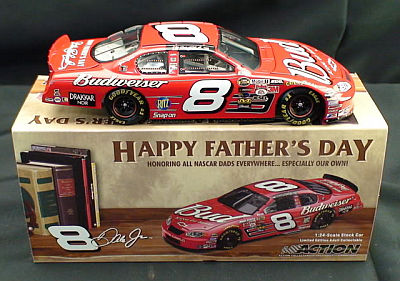 Wishing everyone a Happy Father’s Day weekend, especially mine! Love you Dad! You’re the best! Yeah, I know, I’m recycling the same image I used the last two years but how could I not? After all, his name is also Dale Jr. 🙂 It would be really cool if Dale Jr. happened to win at Michigan tomorrow during Father’s Day. 🙂

Started getting my NASCAR page ready for the 2014 season. Added a link to an image of the 2014 Sprint Cup Schedule and took Mark Martin off since he’s retired from driving. 🙁 Thinking about getting rid of the NASCAR videos since I very rarely add any new ones it seems, or I could just start adding newer videos during the 2014 season. 🙂 My Firefox Configuration page is always getting updated with the latest changes I’ve made to it. Finally, had to change my menu on the left to reflect GetGlue’s change to TvTag.

Well, I’ve updated my blog to WordPress v3.8.1. As with my previous update to v3.8, clicking the update button in the admin section was failing. The browser would just spin its wheels. This time I was determined to find out why and eventually I did. To make a long story short for the sake of this post, it turned out to be a setting on the network card of my webhost’s server that was causing file transfers to the server to be slower than normal (even when FTPing to it). This was causing the blog to timeout during the transfer of the update from WordPress.org. After Surpass made the adjustment to the server, the update worked fine. For those that want a more detailed account of what I was going through, you can read this Update to 3.8.1 could not establish a secure connection to WordPress.org thread I made on the WordPress forum.

I’ve updated the Pelicar Forum to SMF v2.0.7. This update was much less eventful than my blog’s update. I just backed up the file structure and database like any other update and installed the update via the package manager. As always, I tested the update with the development/testing version that’s on my PC first.

Well, that’s all I can think of for now. If anything else comes to mind I’ll add to this or include it in a February 2014 list of changes. 🙂

Okay, before everyone gets their undergarments in a wad, let me explain. First, a Team could be defined as a group of people working towards a common goal. In this respect, NASCAR would be considered a team effort. It takes everyone at the shop, on the pit-crew, on top of the pit-box, and the driver all working together for the team to be successful. The driver cannot win on his or her own. I think everyone agrees with this.

However, in the context of team sports, NASCAR is not “team” centric. In team sports, any one person can be side-lined due to injury or other reason; however, it is still possible for the team as a whole to earn wins, work towards the playoffs, and ultimately win the championship; although, it might be more difficult depending who is out, such as the starting quarterback on a NFL team. (Technically, the coach and every single player on a NFL team could be replaced mid-season and the team’s wins would still count.) With NASCAR, any one person can be side-lined and the team can still earn points and win the championship, unless that one person happens to be the driver. If the driver is out due to injury or other issue, such as Denny Hamlin earlier and now Tony Stewart, the team as a whole is pretty much screwed as far the championship goes, no matter how hard they work, especially if it’s for more than one race. With replacement drivers, no points or wins will count towards the team making the chase or winning the championship. Is this fair to all those guys busting their butts working on the cars and so on? This would be like the wins made by a replacement quarterback not counting during the NFL season.

The argument that the team can still get owner points is kind of moot. First, an owner may have up to four teams. So, the team really isn’t earning points strictly for themselves in this case, unless it’s a single car team where the owner and team are effectively the same entity. Besides, the sport isn’t centered around who’s winning the owner points. The media might mention it once during a race; however, they mostly go on about driver standings almost to the point of over doing it. Heck, sometimes, even I forget the owner a driver is driving for LOL. 🙂

The reason that replacement drivers don’ t count is because NASCAR doesn’t want teams using one driver for plate tracks, one for short tracks, one for road courses, and so on. They want the champion (driver) to be the one that, overall, performed the best at all styles of racing and I understand that. However, this puts tremendous pressure on that one driver. They’ll drive with injuries or not even report possible injuries for fear letting the team and sponsors down and ruining their and the team’s chances to get into the Chase or win the championship, no matter how good a replacement might be.  They may also get back into the car before their body (or mind) is really ready. This is the part I really don’t like about the current situation.

Can, or should, anything be done? I don’t know. About all that really could be done is each team having a designated backup driver who could only step in due to doctors not clearing the primary driver as fit to race due to an injury or something and that the points and wins would count towards the primary driver’s standings.  But, as long as the Chase and Championship is effectively driver and not “team” centric, they won’t do this. NASCAR is really just a single person sport that requires a support group (team) of others to really get the job done. It’s not the 88 team/car that’s 6th in points right now, it’s Dale Jr. It’s kind of like the lone marathon runner or cyclist that requires a great support group to be successful and if they get injured and fall out of the race, well, that’s that.

Anyway, those are my thoughts. 🙂