Well, Twitter finally went and did it. They killed their search widgets. All the search widgets stopped working on my web pages today. 🙁 They’ve been planning this for awhile: Deprecating widget settings – Announcements – Twitter Developers . The following pages are now missing their widgets: my Weather, NASCAR, and Entertainment Page, as well as the EverQuest II search at Mysstie. 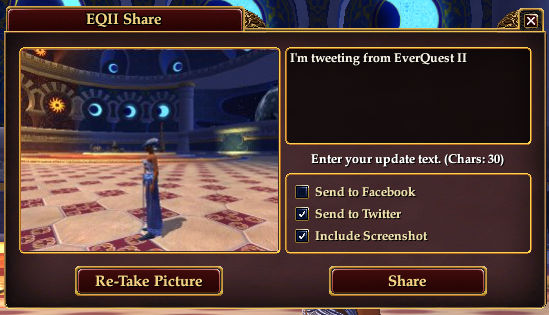 As some of you might know, EverQuest II allows you to Tweet and post updates to Facebook via its EQII Share interface. The problem is, if your tweet message is too long, it will fail with some cryptic error in your chat window. While the EQII Share dialog window shows a character count, it does not take everything into account. Here are some additional things to consider:

I’ve sent feedback from within the game to improve the dialog to take these things into consideration when calculating the character count; however, with the Chains of Eternity expansion just about to be released, I’m pretty sure it will be way down on their list of priorities. 🙂 Anyway, hope someone finds this tidbit of information useful.

Here’s October 2012’s list of changes changes to my websites. 🙂

While I was trying to get a new version of Apache (2.2.23) and PHP (5.3.18) installed and working on my system to better match what Surpass Hosting upgraded my server to on the 23rd, I noticed that I had a slightly newer version of the Inception Blu-ray page than had been uploaded. It now has the back-cover image and properly sized player to match the trailer’s actual dimensions. The things that happened concerning the server upgrade and me trying to get these newer Apache and PHP versions installed and working would probably warrant a separate post.

Decided I would try out Twitter’s new Embedded Timeline widgets. I’ve added this newer version to both my main website and blog. I also decided to test out a #NASCAR search widget on my NASCAR page. At the moment I’d call them a work in progress. For example, I’ve defined the link color to be blue or #0000FF for the widget on my main website and they do show as blue in Firefox; however, they don’t in IE9. The #NASCAR search widget is also missing a lot of tweets that a normal #NASCAR search shows. I’ll give them the benefit of the doubt for now in case there is some behind the scenes work still going on that I’m not aware of or some setting that I need to tweak. If it doesn’t start to work better in a few days then I’ll probably get rid of it.

If you’re like me, you could probably careless about the social media chat widget thing that is to the right of the NASCAR RaceBuddy and/or Media Center video streams. I do my chatting in a separate Twitter tab within the browser or a separate Twitter application such as TweetDeck. Not only is the chat in these widgets less than desirable at times, but it also seems to cause the video streams to constantly lag and start/stop when the chat widget updates and scrolls items down/up. This is the primary reason I decided to see if I could stop the chat widget from loading in the browser. You can always move or resize the browser window to hide it if that’s all you want to do.

My main browser is Firefox (version 10.0.2 as of this writing) within Windows XP Home/SP3 and this is what I did: After poking around in the source code for the page, I found a JavaScript file being loaded that most likely handled the chat widget. Using Adblock Plus, I added a custom Ad Blocking filter to block ||cdn.gigya.com/JS/socialize.js from loading. This is what the Adblock Plus Filter Preferences dialog should look like after adding the filter:

Success! No more chat widget on those pages and the video was much smoother afterwards. Note: this will affect any webpage that uses the same script to display a similar chat widget.

I haven’t tried it yet but I suspect adding an entry to the Windows’ HOSTS file for cdn.gigya.com to point to 127.0.0.1 would have the same effect and would prevent all browsers from showing the chat widget (or anything else associated with that sub-domain).